Nemo Drawing easy with this how-to video and step-by-step drawing instructions. How to draw a Cartoon Fish for beginners and everyone. 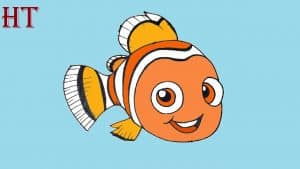 Start by drawing an egg to outline Nemo’s head.

Extend long, curved lines from the shape, outline the body.

Continue these lines, flare out to form the tail.

Draw a small oval near the end of the head using a dotted line. From the oval, extend two slightly curved lines, one longer than the other. Connect the lines using a wavy, scalloped line to form the pectoral fin.

Detail the fin with another scalloped line parallel to the first. Draw some curves and “U” shapes inside the fins.

Draw curved lines on Nemo’s body to form the other two sets of stripes.

Draw a wavy line from the top of Nemo’s head to the base of the tail, forming the dorsal fin.

Detail the fin by drawing two sets of scalloped lines inside each part of the dorsal fin. Then draw curved lines through the fins.

Extend a scalloped curve from the side of Nemo, forming the remaining dorsal fin. Since this is Nemo’s “lucky fin” – the one that was damaged while he was still in the egg – this line will dip inside to indicate a shape irregularity.

Draw a scallop-shaped line on the lucky fin and detail it with some slight curves.

In the eye, draw a circle within a circle. Draw a small circle between the two circles and shade the innermost circle.

Repeat this process in the other eye.

Draw a wide “U” shaped line to form Nemo’s smiling mouth. Connect it at the top with a slight curved line and adorn each corner with a short curved line.

Draw two curved lines in the mouth, outlining the teeth. Ball between the lines.

Nemo color. A tropical clownfish, it is bright orange with white and black stripes. 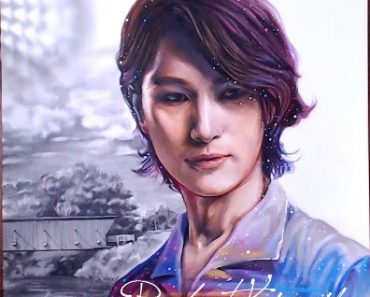